I’ve spent the last two days in Winnipeg, Manitoba, visiting museums and historical sites, talking politics and culture with Katherena, and, most of all, finding small (and sometimes big) traces of Orkney everywhere I go.

I started, though, with Louis Riel. Being a revolutionary sort, I was very quickly drawn to the extraordinary story of this Métis leader who led a successful resistance against government domination, essentially founded (and gave name to) the province of Manitoba, spent time confined in an asylum, and was eventually executed after using the trial to speak his politics proudly. I followed his story at the St Boniface Museum, which has exhibits including his coffin (burnt in a cathedral fire), rifle, and the hood he was executed in, and the Manitoba Museum, which has his beautiful walking stick. Seeing the story told in two museums was fascinating, as the St Boniface Museum celebrates him as a Francophone rebel against Anglophone oppression (it doesn’t do it so crudely as I’m suggesting), whereas the Manitoba Museum alternates between the Anglophone perspective of seeing him as a traitor to the crown and the contemporary liberal perspective as a Métis leader of a multicultural resistance. I don’t know near enough to tell the story properly here, but I’m making my way through Chester Brown’s beautiful graphic biography, I’ve had Mary Siggins’ academic biography strongly recommended, and I’m also reading a historical-cultural study by Jennifer Reid in Riel’s role in the construction of nationhood. 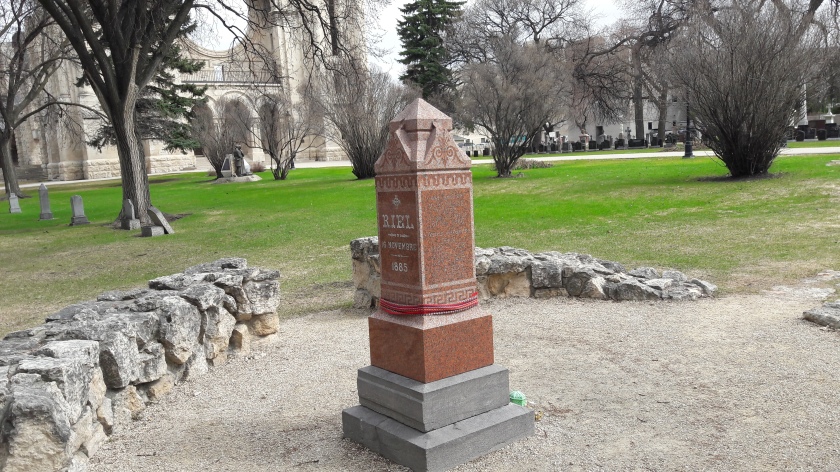 Louis Riel’s grave, with a Métis sash wrapped around the column. A low wall surrounds it, and a half-destroyed cathedral is in the background, with a green lawn between.

The Red River Settlement, which would become Winnipeg, was majority Métis (descendents of European settlers and local First Nations people), with both French and Scottish settlers alongside. The first Scottish settlers were Orkneymen from the Hudson’s Bay Company: In the early days of the HBC it was staffed in the majority by men from Orkney, hired when the ships made their last stop at Stromness, and many migrated south when there contracts expired (or ran away). Alongside them were also Orkney-Cree Métis, descendents of HBC Orkneymen and their common-law wives. And from 1812 on, the Selkirk Settlers — folk whose settlement was arranged by Thomas Douglas, Earl of Selkirk, largely dispossessed by the Highland Clearances — alongside, later, other British and Irish settlers migrating west.

A map of the Red River Colony, showing the positions of Kildonan Scots, Orkney Scots, French and Métis. Right, a display of 19th century agricultural tools.

A brief diversion here on the Selkirk settlers: when I stepped out of my hotel yesterday morning, I walked smack into a huge and fairly grossly romantic statue commemorating the Selkirk Settlers, complete with grief-stricken family and kilted Highlander with dramatically bared (and very cold) chest. Along the Red River now are a series of plaques commemorating the Clearances, and commending Selkirk for his role in providing a home for starving farmers. There’s also a twin of the monument at Helmsdale. Which is to say, this story has mythic significance for contemporary (and now majority Anglophone) Winnipeg. So, alongside the obvious but necessary comment that cleared Highlanders went on to enact genocidal settler-colonisation in Canada, I also want to question a little the philanthropy of Selkirk himself. I need to read more history to really understand the situation, but it seems to me that not only did Selkirk make money and reputation through these efforts, but also the possibility of emigration helped to suppress resistance to the Clearances, and land consolidation in general, in Scotland. It gets rid of potential trouble-makers. And so I wonder if we could say that one of the reasons that a radical, or even redistributive, land politics has been late in coming to Scotland, with its astonishingly unequal land distribution, is precisely because of our role in settler-colonisation. Deprived of tenancy under feudal law, or rights under Udal law, or cut off from enclosed Commons, settlers displaced indigenous peoples from their own freedom on land, and chose the modernising scheme of individual property rights over the common land stewardships they’d lost and were displacing.

The Selkirk Settler monument, as described in the text. Bare trees behind it; the Red River on the right; buildings and a street on the left.

The events of the Red River Resistance played out along a number of cultural and political divides. The clearest is between Francophone and Anglophone, which aligns (but not entirely) with divisions between Métis and white settlers, with another alignment being with divisions between Catholics and Protestants. But none of this is so clear as that: there were Protestant Orkneymen and Orkney-descended Métis in Riel’s provisional government, for example, as well as cultural and relgious divisions between the celtic Highlanders and nordic Orkneymen. And the execution of the Ulster Scots Orangeman opponent of the resistance Thomas Scott was a key flashpoint and led to Riel’s exile, but Riel also led a cavalry in opposition to Fenian Raids on Manitoba which were part of a campaign for Irish independence. Which is to say, the cultural and political battles of Britain turn up again in different and confusing shapes in the Red River Resistance.

Seeing these ghosts of Britain has been very strange, because so often they take on new meanings. The Orange Order carries a very different political resonance in Scotland now, but to be a member of an Orange Lodge then was often a necessary part of a Canadian political career. On the other hand, Orangemen do keep turning up as villains in the stories I’m reading, and in the Manitoba Museum I found the sewn banner of a “Ladies’ Orange Benevolent Association” proclaiming, as if it were trying to make itself a foil for my research interests, “One School. One Flag. One Language.” Some of this feels funny, some of it feels shameful, some of it feels extraordinary, and some of it feels very sad. I read about the Orkney Métis John Norquay, once Premier of Manitoba; I learned that there was  Birsay Village outside of Winnipeg, also called Orkneytown, which failed due to famine and was taken over by Francophone Métis who renamed it Saint François Xavier, but that there is still a Binscarth, Manitoba; I found a vegan burger restaurant on Bannatyne St, named after a South Ronaldsay-born Bannatyne who served in Riel’s Provisional Government, and I keep driving past roads, schools and whole districts named after Orcadian Inksters; I visited a graveyard in St Andrew’s (Manitoba) where I found Fletts, Ballantynes, Johnstones, Harcuses, and plenty other Orkney names besides.

Most strikingly of all, I learned about a creole called Bungi that was spoken in Manitoba until the mid 20th century. Drawing on Cree, English, Orcadian and Gaelic, it very clearly preserved words and grammatical features that came direct from Orcadian: folk who would “slockit the light”, and who would use “to be” as an auxillary verb where English would use “to have”. When I learned that Bungi was now extinct my eyes pricked: Orkney words and forms made it all the way to Manitoba, and became part of a distinctive Métis culture, before losing ground to English, just as I’m worried Orcadian will.

I have a confusion around how to feel about all this. I’m hunting out traces of Orkney very consciously — when I visit a museum or a site, I look for the world, and I feel a little thrill when I see it. My home, now only 20,000 people, represented in this big prarie place under skies as big as those at home. There are probably more people with Orkney names in Winnipeg than in Orkney. But the traces I’m celebrating are also the traces of an enormously destructive settler-colonisation. When Scotland celebrates money-raising Homecoming events, it rarely talks in these terms; when we talk about Orkney-descended Métis, we’re talking about “marriages” under enormous gender and ethnic inequalities; when I find an Orkney placename, it’s taken the place of a name in Cree or Anishinaabemowin. I want to find a place of acknowledging these connections that recognises my place in them. I’m not trying to hunt out guilt, but I am trying to understand these names and words in a way that’s free from denial. 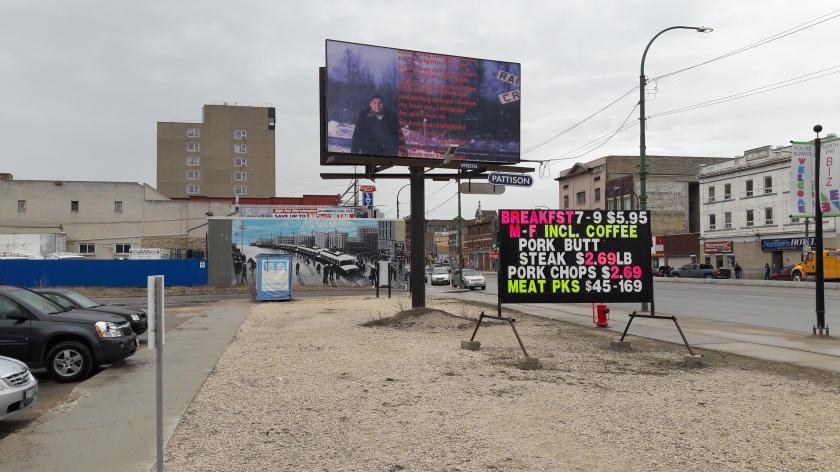 Signs outside Neechi Commons workers’ co-op in downtown Winnipeg, with dirt lots and buildings surrounding it. Adverts right and left; central, and artwork with a picture of a human figure and the text: “niidaachag dahapii sinahae / niiya ngiigimoodiimiigo / my body was kidnapped / my spirit lives on”